Winemakers transport us to their wineries and vineyards to explain how terroir and winemaking create these unique wines.

Buy the book, get a course.

Get the Wine 101 Course ($50 value) FREE with the purchase of Wine Folly: Magnum Edition.

Cabernet Sauvignon is Paso Robles' most planted grape variety and one of their shining stars. With deep colors, and heady aromas of blackberry, tobacco, and mint, these wines stand shoulder to shoulder with the iconic wines of Bordeaux.

We spoke to the owner and winemaker of DAOU Family Estate, Daniel Daou, about Paso Robles and Cabernet Sauvignon's perfect match. 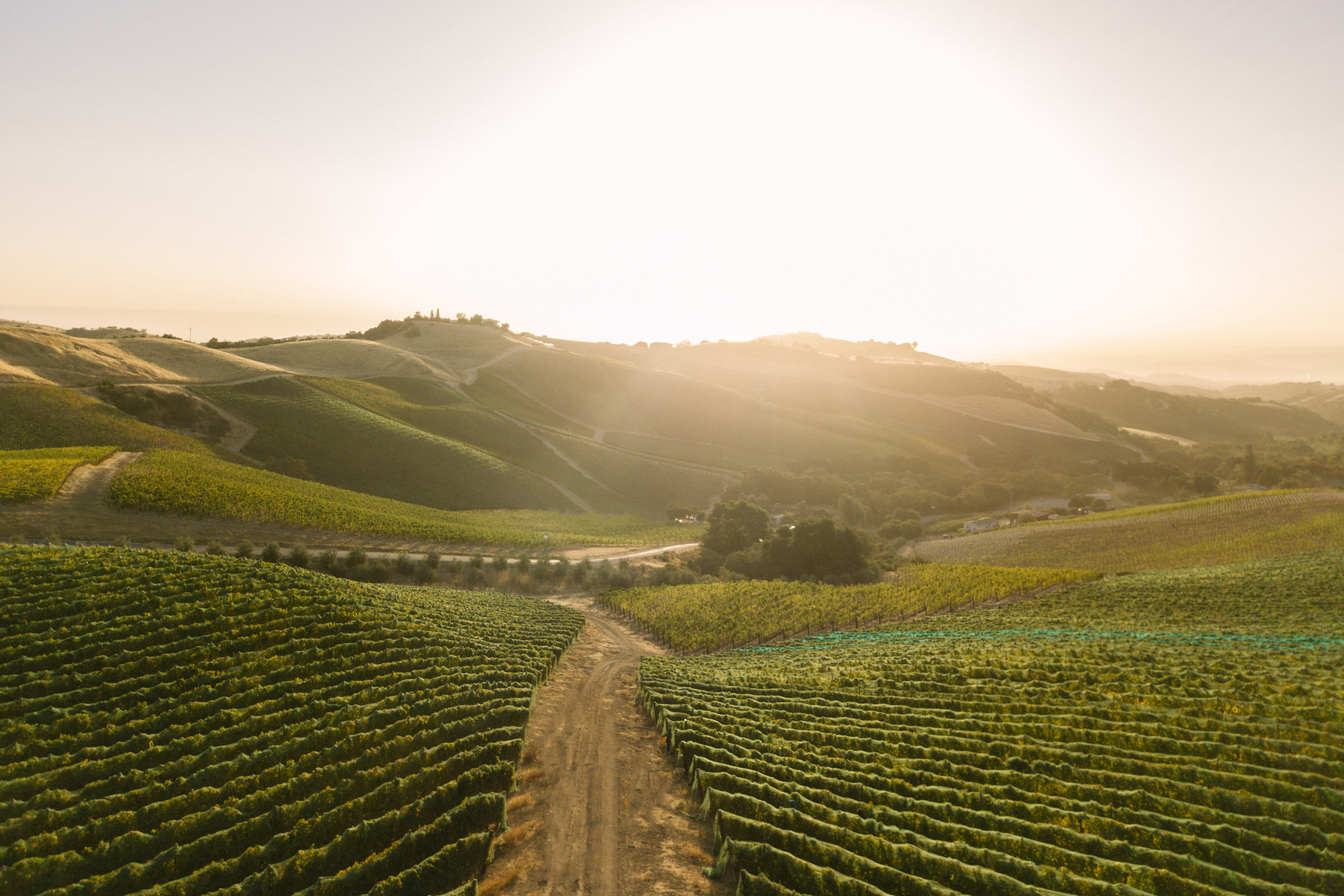 What about Paso Robles terroir, particularly the Adelaida District, makes it a perfect setting to create world-class Cabernet Sauvignon?

"There are many reasons why Paso may have one of the greatest terroirs on earth for growing Cabernet Sauvignon. Soils, weather, and other parameters can vary a lot in the appellation. For instance, you can be 7 miles away from the ocean, and it is called Paso Robles, and it's an area too cold to grow Bordeaux varieties, and you can be 35 miles inland, and it can be too hot to grow the same varieties.

Well it is mostly Argilo-Calcaire (Calcareous Clay) soils. They are reminiscent of the greatest vineyards in Europe like Bordeaux, Burgundy, and the Rhône. These soils are typically not found in California and contribute to many things:

a.) The ability to Dry Farm or Deficit irrigate b.) Making wines that don’t require acidification c.) allowing us to make wines that are fresh, elegant and mineral

It’s also important to mention clay soils - there is a difference between limestone vineyards and calcareous clay. The latter is what you find in top vineyards in Europe. Limestone gives to more angular wines while the clay helps broaden the taste, which works really well with Bordeaux varieties.

Any pilot would tell you that for every 1,000 feet of elevation, you drop about 5 degrees in temperature. The Adelaida District is a higher elevation mountain range. Our vineyards are located between 1,700-2,200 feet.

Simply put, our average temperatures yearly tend to be approximately 2-5 degrees less than Saint Helena in Napa and 5-9 degrees less than Paso Robles at the Airport (East Side). This climate where we see on the average is ideal for ripening Bordeaux varieties.”

What do you do in the vineyard and the winery to produce such high quality Cabernet?

“In terms of winemaking, I am a minimalist, especially with our Estate wines. I use native yeast to make the wine and only use 100% free run juice to produce silky tannins that are integrated and allow the consumer to drink the wine upon release while having the potential to last for decades at a time.

The wine, for me, is made in the vineyard. We farm organically and incorporate sustainable and biodynamic principles. My entire vineyard philosophy has to do with vine balance. That is why I plant up to 3,630 vines per acre - to reduce the number of clusters per vine and therefore allowing me to achieve perfect ripeness on the grapes.

I rarely irrigate. Paso Robles in general has the ability to reach a very high level of phenolics. This in turn, allows the region to provide cult status power and concentration at an affordable price to the consumer.”

If you had to describe Paso Robles Cabernet Sauvignon to someone in one sentence, what would you say?

“In summary, I believe that the world is realizing how unique the Paso Robles region is. The quality of the wines are disrupting the market for Bordeaux varieties today. This means the consumer is realizing that you get incredible wines that are more affordable.”

Syrah can be elegant and perfumed but also meaty and powerful, and sometimes, when you get it just right, it can be both. That’s what you can find in Paso Robles Syrah, if you know where to look.

We spoke with Eric Jensen, founder and winemaker of Booker Vineyards, to find out what makes Paso Robles and Syrah a great fit. 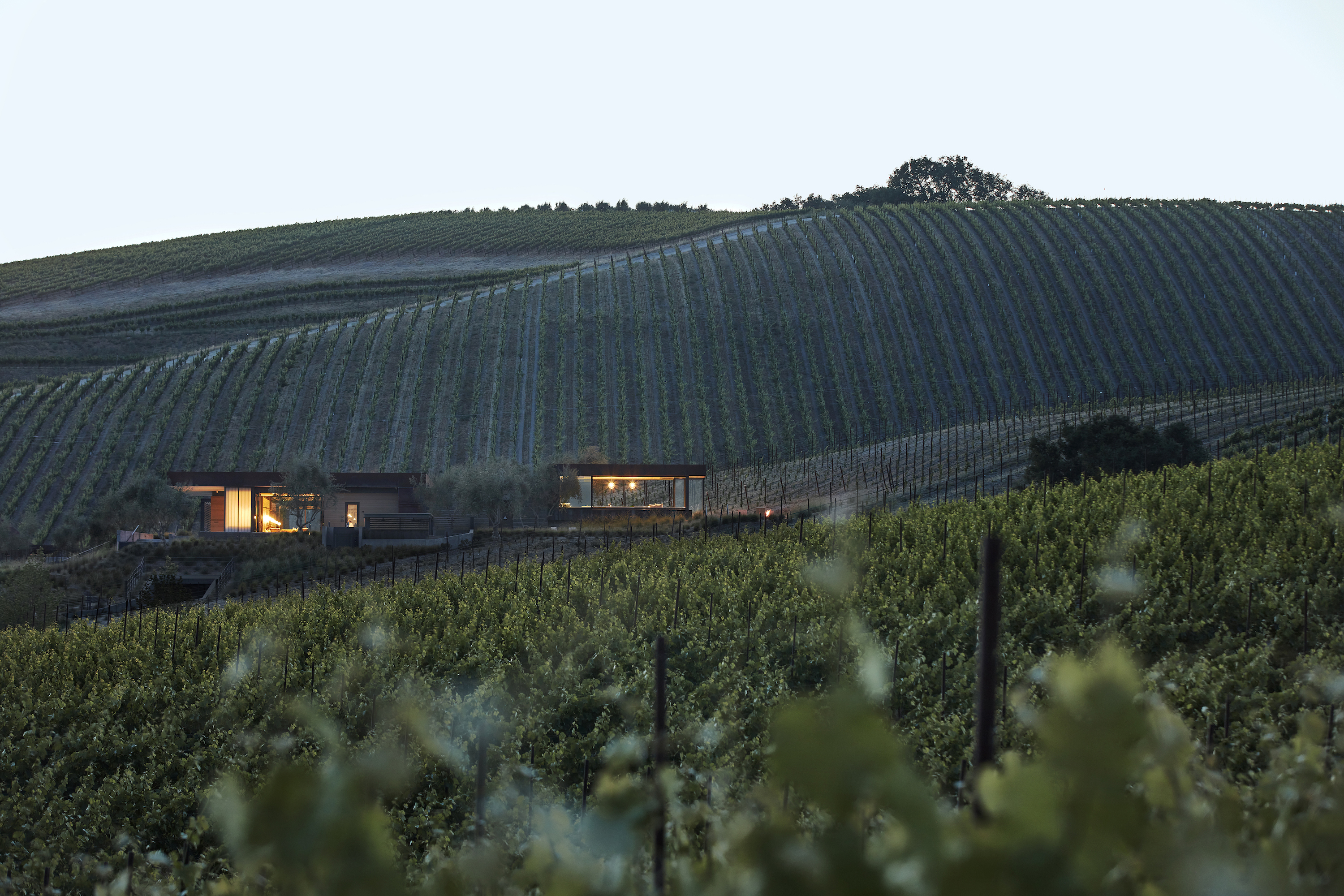 “There are great regions around the world to grow Syrah, one not necessarily better than the other, just different. The reason I chose Paso Robles is I believe for my palate it’s the best spot because of the high level of siliceous in calcareous shale and, in a lot of cases, of pure limestone soils. This along with our diurnal swing allows us to have a line growing season and retain acid.”

What, in your opinion, should people expect from outstanding Paso Robles Syrah?

“A lot of us in Paso are focused on organic, biodynamic and regenerative farming. This makes a huge difference in the soil and farming which of course gives us a sense of place.”

What do you do in the vineyard and winery to make an outstanding Syrah?

“Making Fracture great is all Vineyard. I try not to screw it up! The Blocks it comes from are all low tannin with huge color so I’m blessed with this enormous mouthfeel without it being dry or too massive due to the tannins. Then it’s just getting into the tank and paying attention to what we’re extracting. I want that wine to be as soft and luscious as possible.

We do both punch downs and pumping over depending on tank size for extraction. In our standard tanks we start with pump overs early until the cap loosens up, then we finish with punches.

The entire time we are fermenting we are running phenolic testing of the juice to see where our color and tannins are. It’s a balancing act between the two because we don’t like super heavy wines and never more tannins that aren't bindable to color.

It becomes very data driven then with our palate only acting as a backup. We end up with very soft texture on the mid palate and a nice smooth finish as opposed to having harsh, bitter tannins at the end. We love to add stems in our vertigo blend and Oublie.”

This classic blend, originating from Châteauneuf-du-Pape in France, can create some amazingly powerful yet seductive red wines. With Grenache adding body and fruit, Syrah adding perfume and spice, and Mourvèdre adding color and tannin, these are wines that can age.

A passionate group of people took up these Rhône varieties in America and were nicknamed the Rhône Rangers.

We spoke to Jason Haas, owner of Tablas Creek and son of Robert Haas, a founding member of the Rhône Rangers, about what makes Rhône Blends and Paso Robles like two peas in a pod. 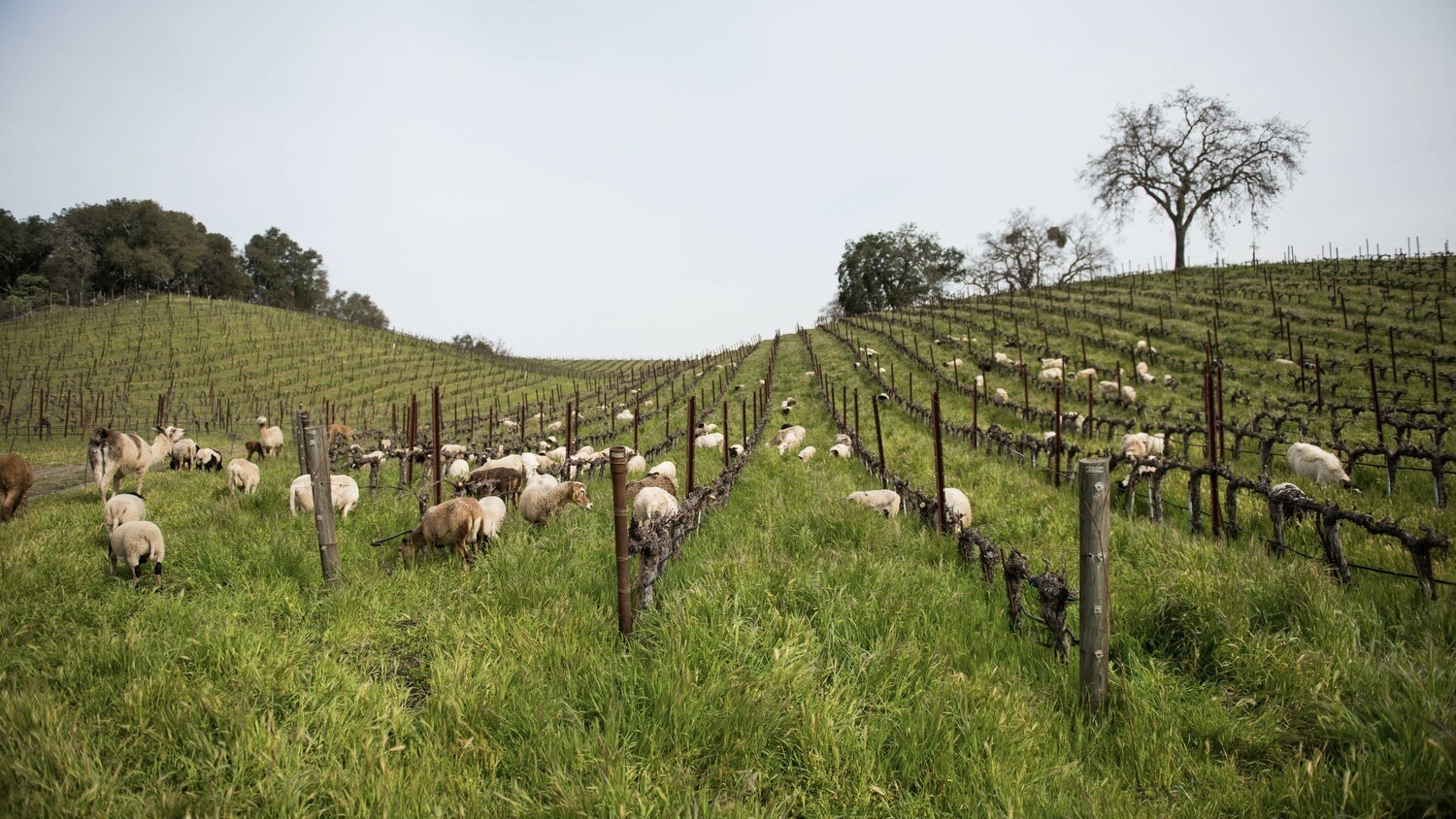 What about Paso Robles terroir makes it a perfect setting to create world-class Red Rhône Blends?

“We looked for four years for the right spot to do our California riff on Châteauneuf-du-Pape and chose Paso Robles over several places that were better-known at the time, including Napa, Sonoma, and Santa Barbara County. There were three things that convinced us this was the right spot.

Second, in these hills west of town, there’s enough rainfall to dry-farm. We average 26 inches of rain a year, the same as Châteauneuf-du-Pape.

And third, there are these amazing calcareous soils at the surface here, in greater concentration than anywhere else in California.

The water-retention capabilities of these soils is key to holding the water we get in the winter and rationing it out to the vines as they need it during the growing season, while the chemistry is critical to maintaining good acids even in our hot, dry summers.”

What do you do in the vineyard and the winery to produce such high quality Rhône Blends?

“I know it sounds cliché, but it all starts in the vineyard. We made the decision at the beginning to import new clones from Beaucastel which gave us access to the best clones in the world as well as new grapes like Grenache Blanc, Counoise, and Picpoul Blanc that didn’t previously exist in California.

We’ve farmed organically since our inception, biodynamically for the last decade, and became the first winery in the world to get the new Regenerative Organic Certification in 2020.

All that focus on soil health has given us robust vines even in our high-stress climate. We’ve moved increasingly to dry-farming since 2000, which gives us great intensity.

And then in the cellar we use all native yeasts (which we consider part of our terroir) and minimal new oak to try to keep our fingerprints off the wines during fermentation.

Finally, the blending process we have developed over the last two decades, done as a group and largely blind, ensures that we’re responding to what makes each year unique and building the best wines the vintage can give us.

Plus we have a great team here, with the same winemaker (Neil Collins) since 1998.”

If you had to describe Paso Robles Rhône Blends to someone in one sentence, what would you say?

“Intense but vibrant, where you can taste both the sun and the earth.”

Viognier is perfumed, aromatic, and full bodied and rich, but is often overlooked. It’s a tough grape to make into excellent wine, as it can be easily overripened.

We spoke to Jordan Fiorentini, winemaker at Epoch Estate Wines, to find out more about this Northern Rhône grape, and how she turns it into something wonderful. 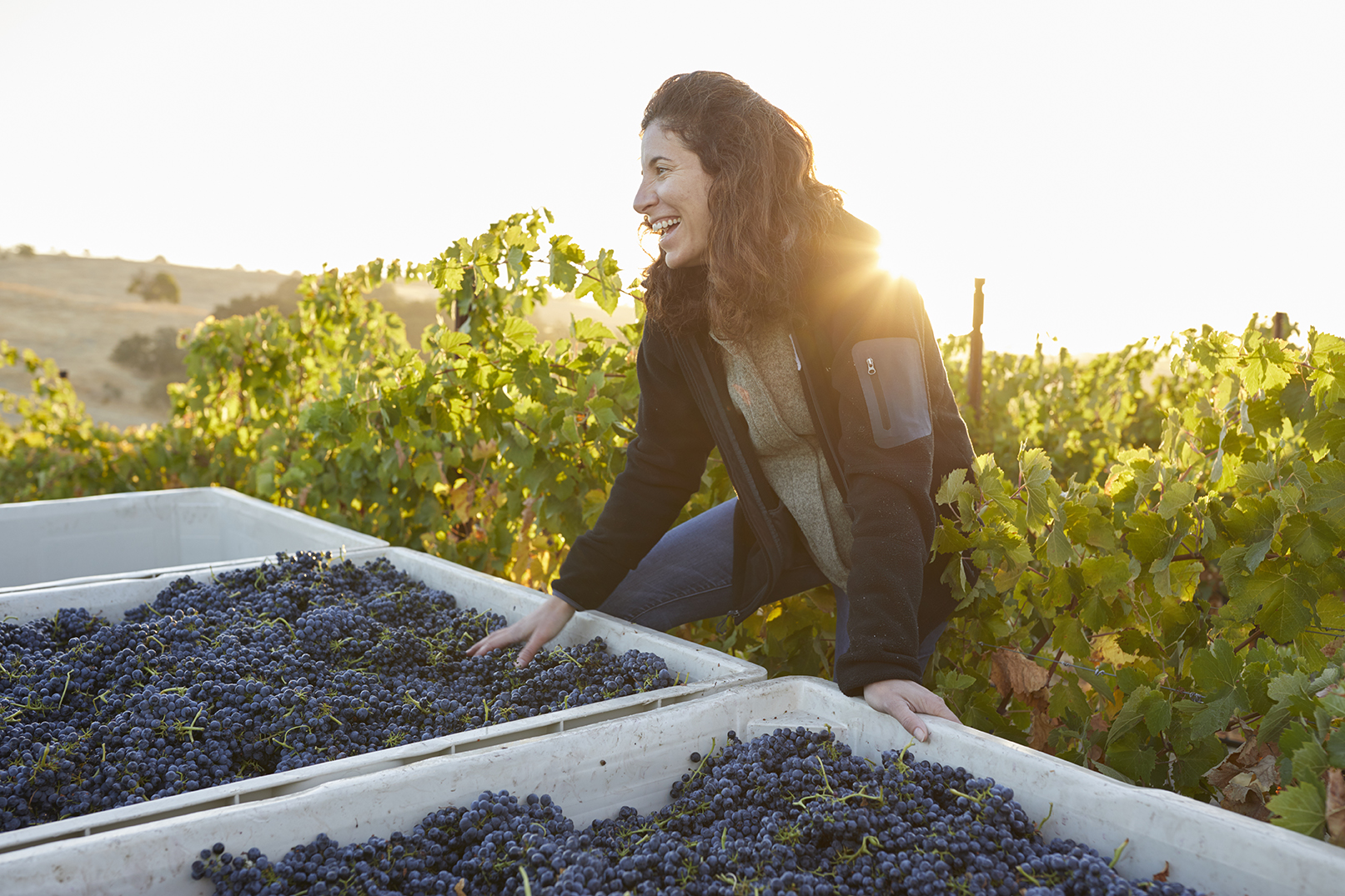 Why is Viognier a grape that everyone should try?

“It can rival any great Chardonnay of the world due to its complexity and its ability to age. Red wine drinkers love this wine because it has the body of a red wine, yet has the perfumed elegance of some white wines. Viogniers from Paso Robles can rival some impressive white Burgundy too.

In a blend it can provide structure, complexity, and interest. And you can drink it all night. It’s a white wine lover's grape because of the complexity but also for red wine drinkers for the power and structure too.

We age it in oak to give creaminess, complexity, and textural elements, but you have to be careful to not overlay flavor, just integrated texture. Integration is key. We’re not looking for oak flavors, but rather looking for harmony that oak can provide.”

What makes the terroir of Paso Robles great for Viognier?

“We grow Viognier on all three of our vineyards, two in Paso Robles and one in York Mountain. The two in Willow Creek are blended Grenache Blanc, which actually adds acid and minerality to the blend.

Our single vineyard Viognier in York Mountain has the oldest functioning winery/vineyard in the AVA. The cooler climate, sandstone soils found in York Mountain really give a pure expression of Syrah, Grenache and Viognier. It’s easy to compare and contrast it with the Viognier grown in the Willow Creek District too.

The Viognier from York Mountain has to be harvested quickly as it can very quickly go soapy and blousy.

We’re asking ourselves, “how does Condrieu do it?” and we take inspiration from that appellation. The climate here in York Mountain has fog, and is about 10-15°F cooler than Paso Robles and therefore needs a bit more ripening time.

The grapes ripen slower here, and the huge ups and downs and it just gives extra hang time and that makes all the difference in acidity and complexity. York Mountain, because of the extra hang time you get lots of complexity but it’s not over ripe.

It’s just concentration and evolution of complexity over time.”

Prove your knowledge, build your resume.